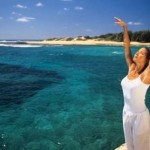 If you dial 808-245-6001 for the weather report on Kauai, you will probably hear this ‘forecast’: “Mostly fair today, with occasional windward and Mauka (Mountain) showers. Tonight, mostly fair, with showers varying from time to time and place to place.”  Except for storms, Kauai’s normal weather pattern is mostly sunny, with showers passing over the ocean, crossing the coastline and backing up against the island’s mountainous interior.

Like all the Hawaiian islands, Kauai’s sunny side varies with the winds.  Normal trade winds from the north and northeast bring rainfall to these ‘windward’ shores and create the ‘lee’ of the island in the south, at Poipu, and west, at Kekaha and Polihale.  When the clouds back up against the mountains and bring showers to the north shore beaches, Poipu and Salt Pond may have very sunny skies.  However, when the winds blow from the south and west, called “Kona Winds”, the lee is in the north and northeast.  The north shore may be spectacular while the eastern and southern shores have rain.

Planning cam make the most of any weather, since Kauai has ‘micro-climates’ and a 20 minute drive may take you from rain to sun.  Be prepared to drive to the sun – all the way west to Polihale if necessary.  If it’s clear up north, visit the north shore, for these beaches are by far the most spectacular, and if your stay is only for a few days, you may not get another chance.  Rain outside?  Drive south to Poipu or west to Salt Pond or Kekaha, wher it’s usually drier.  With heavy rain, Polihale might be your best option.

Only an island-wide storm should send you indoors to rent a movie, so check the Kauai weather and Kauai surf report before deciding whether to go north to Hanalei, south to Poipu, or west to Kekaha.  Call 245-6001, try our local paper: Kauai World, or call these friendly merchants who have agreed to be your weather tipsters: Nukumoi Beach Center, Poipu (742-8019), Wrangler’s Steak House, Waimea/West (328-1218), Pedal & Paddle, Hanalei (826-9069 or Hanalei Surf Company, Hanalie (826-9000).

Weather patterns vary with the seasons.  Showers are more frequent in the winter and spring, while summer months are warmer adn more humid, fall months are clearer and more dry.  Temperatures range between 60’s at night and mid 80’s most days, and in the summer months can reach the low 90’s.

Kauai beaches also change their moods with the seasons.  In summer, the water 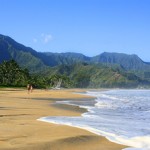 may be calm and clear, but winter surf at the same beach can foam and crash like thunder.  Some north shore beaches disappear entirely under winter surf, and may officially close for safety.

Have fun, be safe and soak up the sun weather it be via rays or sometimes in liquid form (aka: rain).