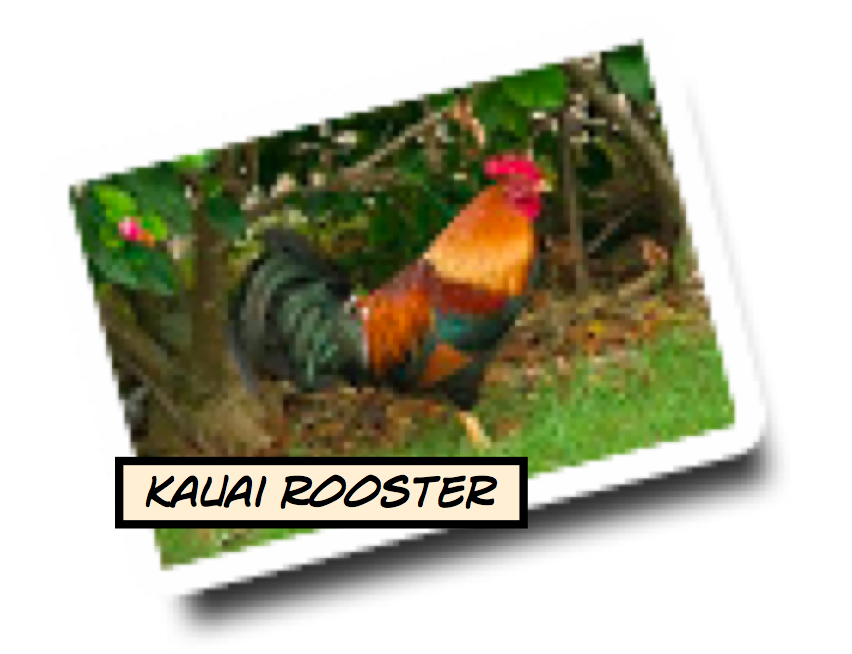 Like much of the flora flourishing on the island Kauai’s animal and mammal species have arrived via sea and air along with their  human counterpart as far back as Captain Cook (possibly even further) and we’ve come to embrace their presence on the island as one of our own.

There are very few places on Kauai that won’t be startled in the early morning hours by the cry of the ‘gentleman’ to the  left; Kauai’s Natural wake-up call; the Kauai Rooster.   Along with our feathered friend, the island’s long standing residents include the ‘Bufo’ toad, the wild (feral) pig and the sticky-fingered gecko.  They all will undoubtedly be a part of your Kauai experience at one point or another.

There are those residents of Kauai and in Hawaii that have reached the endangered species list.

The nene (nay-nay) goose is one of those.  Once down to 50  they now number somewhere upwards of 2000 birds on the islands.  On Kauai they generally hang out on the north shore near Kilauea point.  The Hawaiian Green Sea Turtle (Honu), also endangered can be seen off Kauai’s coastline, coming up for a breath of air.

Hawaiian monk seals  face more human encounters than other marine mammals on Kauai. Just like humans they need to bask in the sun too, to relax and rejuvenate themselves. A person moving closer than the allowed 100 feet may cause the seal to retreat to the ocean before they are fully rested and may become  easy prey  to predators.  The bounty for those harassing and/or killing the seals can reach up to $25,000.00 and 5 years in jail.  The Hawaiian Monk Seal Watch Program can be contacted by calling (808) 644-1673 (north shore) (808) 644-1849 (south shore) or check the organization’s web site for more information.

And of course the “Star” of the show is the humpback whale; from their summer feeding grounds in Alaska, the whales migrate more than 3,500 miles to the warm tropical waters of Hawaii to mate and give birth.  The ‘show’ can start as early as late November and continue through May –  breaching , fluke slapping, spouting and ‘blowing’-  so keep an eye out for these gentle giants.

These are just a few of the animals and mammals one will encounter here on Kauai.   Remember a good portion of them are endangered so please “look, don’t touch”  they are our reminder of the fragility of the Eco-system and our direct connection with it.

The following web sites can give you further information about the resident Kauai Fauna;

This website uses cookies to improve your experience while you navigate through the website. Out of these cookies, the cookies that are categorized as necessary are stored on your browser as they are essential for the working of basic functionalities of the website. We also use third-party cookies that help us analyze and understand how you use this website. These cookies will be stored in your browser only with your consent. You also have the option to opt-out of these cookies. But opting out of some of these cookies may have an effect on your browsing experience.
Necessary Always Enabled
Necessary cookies are absolutely essential for the website to function properly. This category only includes cookies that ensures basic functionalities and security features of the website. These cookies do not store any personal information.
Non-necessary
Any cookies that may not be particularly necessary for the website to function and is used specifically to collect user personal data via analytics, ads other embedded contents are termed as non-necessary cookies. It is mandatory to procure user consent prior to running these cookies on your website.
SAVE & ACCEPT