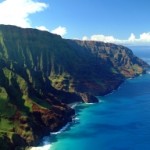 Kauai, Hawaii is also named  the Garden Isle. Mount Wai’ale’ale averages 485 inches of rain per year, which explains why Kauai, Hawai’i is known as “The Garden Isle.” However, it is interesting to note that the island also has another, older name: “The Separate Kingdom.”

Kauai, Hawaii is said to have been the first of the Hawaiian Islands settled by Marquesan seafarers. The earliest Polynesians lived along Na Pali coast and left behind evidence of their existence dating from as early as 200 A.D. to 600 A.D. The ancient findings, combined with its distance from the rest of the island chain, may be why Kauai was earlier proclaimed The Separate Kingdom with a royal bloodline that was considered the purest in the Islands.

In succeeding migrations, the strong, fearsome Tahitians arrived and overpowered them, establishing the Tahitian religion and culture as the basis for Hawaiian society.

In the early 1700’s, Kauai had withstood the ravages of Kamehameha’s army, an assault resulting in conquering of all the main islands except Kauai for the purpose of creating a unified Hawai’i under one king. Later, it was Kauai’s Chief Kaumuali’i who peacefully ceded authority over his island to the Kamehameha the Great in 1810. 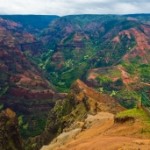 the west coast of Kauai – while sailing from Tahiti toward North America in 1778. It was Captain James Cook who opened the door to the influx of westerners missionaries, businessmen, laborers and succeeding cultures that gradually diminished the numbers of full-blooded Hawaiians.

Kauai took its place as part of an island chain over 5 million years ago. Magma spewing from a hot spot beneath the floating Pacific Tectonic Plate formed Kauai as it did the other islands in the chain. Kauai is the oldest of the Hawai’ian islands and it is believed the volcano that created Kauai first began erupting some 10 million years ago. Once rising more than 10,000 feet above sea level, Olokele Volcano has since eroded down to two main peaks Wai’ale’ale (5,148 feet) and Kawaikini (5,243 feet) with the rest of the mountain sinking to form the crater that is home to Alaka’i Swamp. Alaka’i Swamp is the largest high-elevation swamp in the world and the starting point for Waimea River, the longest river in the Islands. The 3,000-foot-deep Waimea Canyon, dubbed “The Grand Canyon of the Pacific,” is also the product of these erosive forces. 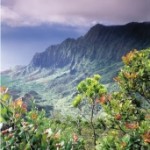 Kauai’s age has also led to something of a geographic anomaly: although it is one of the smallest of the main Hawaiian Islands, the forces of nature have had more time to break the island down and produce more sand beach around its 110-mile coastline than any other island in the chain. Meanwhile, it remains the least populated of Hawai’i’s four counties with roughly 56,000 permanent residents, and both development and tourism have been concentrated in relatively few locations. All of which furthers the sense that Kauai- Hawaii is, in fact, a separate kingdom.

Kauai is someplace very special, our little heaven on earth!  If your travel plans do take you to Kauai, please take a moment to review our Kauai Vacation Rentals... Many Thanks!